GoldenEye: the movie That Reestablished the James Bond Franchise Celebrates the 25th Anniversary 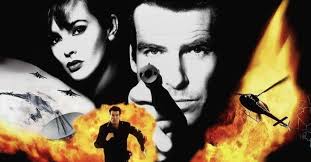 Movies about Secret Agent 007 have entertained multiple generations of audiences in the last 60 years. Bond was played by a plethora of charismatic actors, from witty casanova portrayed by the late great Sir Sean Connery in classics like Dr. No and Diamonds Are Forever to the calm and stoic Daniel Craig, who took the leading role in box office record-breakers such as Casino Royale and Skyfall.

Of course, with the James Bond franchise surviving more than half a century, it had its ups and downs, and one of its most significant downs was recorded during the 1980s. After the 1989 Licence to Kill starring Timothy Dalton that had the lowest box office numbers of any Bond movies to date, it seemed like the franchise was heading in a downward spiral, and many believed it might never bounce back.

However, that all changed in 1995. A new actor (Pierce Brosnan) and a brand new story made 007 a hot topic once again. We are, of course, talking about the legendary GoldenEye that this year celebrates its 25th anniversary.

To understand why the 80s Bond movies were slowly slipping away from the audience’s attention and why GoldenEye turned things around, we have to take a step back and see how the world was changing at the time.

The Bond franchise needed a big turnaround due to several reasons.

Before the 1980s, James Bond movies were sort of endemic. They were the only kinds of movies to feature jaw-dropping stunts (for the time being), futuristic and sometimes ridiculous gadgets, gorgeous girls, and exotic locations all in one big-budget cinematic spectacle.

However, the 80s were a renaissance of sorts when it came to this genre. We saw the release of blockbuster hits like Rambo, Ghostbusters, Raiders of the Lost Ark, Die Hard, and many other action-packed adventures featuring blood-thirsty villains and heroes with never-give-up attitudes. James Bond movies were suddenly not that original anymore and were starting to take the back seat.

Meanwhile, the fall of the Soviet Union that ended the Cold War automatically meant that 007 would no longer be able to fight communist baddies — the villains in almost every Bond film up to that point.

The world was also changing from the perspective of social justice and gender equality. Bond may have been seen as a witty ladies-man at the time, but a lot of his behavior towards women back then can now be described as sexist and would never fly with a younger socially-aware audience.

In early Bond movies, most female villains were sexy spies that tried to seduce Bond, looking to kill him once they got to a hotel bedroom. Even M’s secretary, Miss Moneypenny, had often been objectified by Bond’s snarky comments in the early films.

The 1995 movie, GoldenEye, would denounce this attitude that women should only be portrayed as minor-role secretaries or sexy spies. Even M (played by Judi Dench) stings Bond with a comment that he’s a “sexist, misogynist dinosaur, a relic of the Cold War” — a clever jab at all the previous Bond movies.

Apart from M, who is the only female head of MI6 in the franchise, GoldenEye features two more women with significant roles. In the movie GoldenEye, a Canadian admiral was murdered by Janus operative Xenia Onatopp in a plot to steal the Eurocopter Tiger. Xenia Onatopp (Famke Jansen) is one of the film’s main villains and the best Bond villain, according to many fans of the franchise. There is also Natalia Simonova (Izabella Scorupco), who is a moral computer programmer determined to help 007 in his mission.

The movie still has plenty of steamy scenes, and it continues the tradition of using Russians as main villains, but that’s because the plot is connected to the Cold War era, specifically 1986, when one of Bond’s closest compatriots, Secret Agent 006, was supposedly captured and executed.

As it turns out, this was a ploy constructed by 006 himself to get revenge on MI6 and the entire British Empire, so he becomes the movie’s main villain. This isn’t a major spoiler, as everything we’re talking about here is shown in the movie’s original trailer.

Playing safely alongside new norms, GoldenEye prepared the grounds to sit well with the 90s audience, but that by itself wasn’t going to be enough. This 007 title still needed everything that made the old Bond films attractive.

What is Bond’s favorite Casino game? It might be Baccarat. 007 plays Baccarat Chemin de Fer in the movies Dr. No, Thunderball, On Her Majesty’s Secret Service, and GoldenEye (where the Xenia character refers to it as one of their shared passions). Fancy casino games? If you’re playing from Canada give a Canadian dollar Casino a try.

GoldenEye’s action scenes are what ultimately made this movie one of the best of its genre, not just for the time but in the entire history of action movies. Everything from the opening bungee jumping scene off of a dam to numerous shootings, explosions, and car chases was done expertly and in the best way that the technology and stunt choreography allowed back in 1995.

The dialogs are catchy, funny, badass, and sometimes a bit corny, but that’s what you should expect from a 130-minute Bond film. The story itself is nothing that will blow your mind, but it’s also not lukewarm like many of its preceding storylines were.

GoldenEye earned double what Licence to Kill made six years prior. Adjusted for inflation, GoldenEye was by far the most successful Bond film, and it was only exceeded in box office earnings in 2006 with the release of Casino Royale.

The movie was so successful that it also inspired the creation of a 1997 Nintendo 64 first-person shooter game of the same name that became legendary in its own right.

It’s safe to say that GoldenEye put the 007 movie franchise back on track and that it withstood the test of time, as it’s still regularly shown on TV. If you never watched it, we advise that you make some popcorn and enjoy this 2-hour action-packed adventure that is sure to make you fall in love with James Bond movies. Other Casino movies you can watch on Netflix.